About a week ago I rebuilt my Debian-based home server, finally replacing an old Pentium 4 PC with a more modern system (which has onboard SATA ports and gigabit ethernet, what an improvement!). It’s based on an Asrock B75 Pro-3M motherboard, an Ivy Bridge Pentium G2020 processor and 4 gigs of RAM. 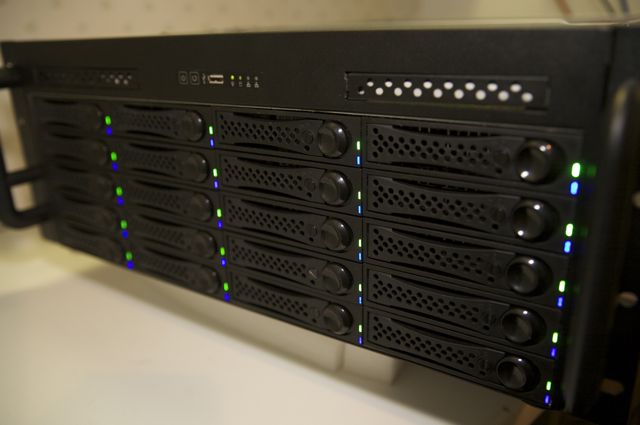 I migrated all the drives I had in the old server, including the boot drive, so I didn’t have to configure much. The server has a 200 gb IDE boot drive (connected via a 5€ IDE-SATA converter I got off eBay) and 3×2 Tb WD20EARS 2 Tb “Green” drives configured in RAID-5.

Read speed was finally able to almost saturate my gigabit ethernet, but write speed was still disappointingly slow: about 35-40 megabytes/s via AFP and around 65 mb/s directly on the server.

I did some googling and found out the trick to improve my speeds: increase the stripe_cache_size from the default 256 to 16384. This required ~200 mb of extra RAM, but it was definitely worth it.

The stripe_cache_size parameter resides in the /sys/block/md0/md/ directory (assuming md0 is your RAID device). To change it, just launch:

Here you can see some read and write speed tests I did with both settings, the difference is quite noticeable:

The last step was to make the change permanent. To do so, I edited my /etc/rc.local and made it executable. Just add this line into it:

No sudo needed here since /etc/rc.local is run by root already. Make the file executable so it is run at each boot, and you’re done:

You can find more useful info about tuning your array in this article by Tor Henning Ueland, and some suggestions on how to properly align 4k-sector drives (such as Western Digital Green and Red ones) in this outstanding post by Dennis Fleurbaaij: i rebuilt my array aligning my partitions properly (note: you have to completely delete and re-create your array to do so) and now I have 190 mb/s both in read and write speed from 3 WD20EARS Green drives, which I’ll replace with 2 Tb Western Digital Red drives, which are faster and are more power efficient.

I’ll end this post with a photo of my server. The cable that runs into the front of the PC was the power cable for the USB IDE enclosure I used before I got the IDE-SATA converter. The 3G dongle is used both as a GSM gateway for Asterisk (I’ll talk about that in a future article) and as a backup internet connection in case the main one goes down. […] But that didn’t work. So i did some more research and found out about a thing called strip cache size. It was only set to 256 bytes! So I enlarged that to 16k and my performance jumped up to about 8 […]